David has been serving on the Warwick school committee since 2016 and has been a RIASC board members since 2018. He is a graduate of RIASC’s Leadership Academy and has achieved Master’s Academy status.

Michael Traficante of the Cranston School Committee was elected as a new RIASC Board Member for a two-year term. RIASC does its best to seek representation from school committees across the State.

Other Board members include: 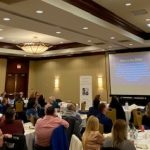 It was great to meet our new members and reconnect to our veteran members. Attendees...

RIASC compiles exclusive data files for members only, including salary and benefit data and statistics for all levels of employees in disctricts throughout Rhode Island.
Available Data